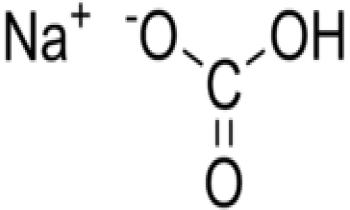 NaHCO3 is mainly prepared by the Solvay process, which is the reaction of sodium chloride, ammonia, and carbon dioxide in water. Calcium carbonate is used as the source of CO2 and the resultant calcium oxide is used to recover the ammonia from the ammonium chloride. The product shows a low purity (75%). Pure product is obtained from sodium carbonate, water, and carbon dioxide as reported in one of the following reactions. It is produced on the scale of about 100,000 tonnes/year (as of 2001).[70]

NaHCO3 may be obtained by the reaction of carbon dioxide with an aqueous solution of sodium hydroxide. The initial reaction produces sodium carbonate:

Further addition of carbon dioxide produces sodium bicarbonate, which at sufficiently high concentration will precipitate out of solution:

Commercial quantities of baking soda are also produced by a similar method: soda ash, mined in the form of the ore trona, is dissolved in water and treated with carbon dioxide. Sodium bicarbonate precipitates as a solid from this method: