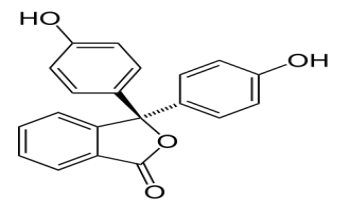 Phenolphthalein's pH sensitivity is exploited in other applications: Concrete has naturally high pH due to the calcium hydroxide formed when Portland cement reacts with water. As the concrete reacts with carbon dioxide in the atmosphere, pH decreases to 8.5-9. When a 1% phenolphthalein solution is applied to normal concrete, it turns bright pink. However, if it remains colorless, it shows that the concrete has undergone carbonation. In a similar application, spackling used to repair holes in drywall contains phenolphthalein. When applied, the basic spackling material retains a pink coloration; when the spackling has cured by reaction with atmospheric carbon dioxide, the pink color fades.[3]

Phenolphthalein is used in toys, for example as a component of disappearing inks, or disappearing dye on the Hollywood Hair Barbie hair. In the ink, it is mixed with sodium hydroxide, which reacts with carbon dioxide in the air. This reaction leads to the pH falling below the color change threshold as hydrogen ions are released by the reaction:

To develop the hair and "magic" graphical patterns, the ink is sprayed with a solution of hydroxide, which leads to the appearance of the hidden graphics by the same mechanism described above for color change in alkaline solution. The pattern will eventually disappear again because of the reaction with carbon dioxide. Thymolphthalein is used for the same purpose and in the same way, when a blue color is desired.[4]