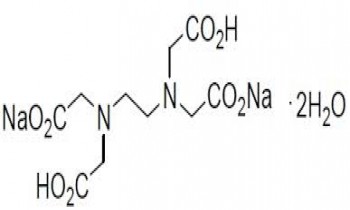 In industry, EDTA is mainly used to sequester metal ions in aqueous solution. In the textile industry, it prevents metal ion impurities from modifying colors of dyed products. In the pulp and paper industry, EDTA inhibits the ability of metal ions, especially Mn2+, from catalyzing the disproportionation of hydrogen peroxide, which is used in chlorine-free bleaching. In a similar manner, EDTA is added to some food as a preservative or stabilizer to prevent catalytic oxidative decoloration, which is catalyzed by metal ions.[4] In soft drinks containing ascorbic acid and sodium benzoate, EDTA mitigates formation of benzene (a carcinogen).[5]

The reduction of water hardness in laundry applications and the dissolution of scale in boilers both rely on EDTA and related complexants to bind Ca2+, Mg2+, as well as other metal ions. Once bound to EDTA, these metal centers tend not to form precipitates or to interfere with the action of the soaps and detergents. For similar reasons, cleaning solutions often contain EDTA. In a similar manner EDTA is used in the cement industry for the determination of free lime and free magnesia in cement and clinkers.[6][page needed]

The solubilization of Fe3+ ions at or below near neutral pH can be accomplished using EDTA. This property is useful in agriculture including hydroponics. However, given the pH dependence of ligand formation, EDTA is not helpful for improving iron solubility in above neutral soils.[7] Otherwise, at near-neutral pH and above, iron(III) forms insoluble salts, which are less bioavailable to susceptible plant species. Aqueous [Fe(edta)]− is used for removing ("scrubbing") hydrogen sulfide from gas streams. This conversion is achieved by oxidizing the hydrogen sulfide to elemental sulfur, which is non-volatile:

In this application, the iron(III) center is reduced to its iron(II) derivative, which can then be reoxidized by air. In similar manner, nitrogen oxides are removed from gas streams using [Fe(edta)]2−. The oxidizing properties of [Fe(edta)]− are also exploited in photography, where it is used to solubilize silver particles.[8]

EDTA was used in separation of the lanthanide metals by ion-exchange chromatography. Perfected by F. H. Spedding et al. in 1954,[citation needed] the method relies on the steady increase in stability constant of the lanthanide EDTA complexes with atomic number. Using sulfonated polystyrene beads and Cu2+ as a retaining ion, EDTA causes the lanthanides to migrate down the column of resin while separating into bands of pure lanthanides. The lanthanides elute in order of decreasing atomic number. Due to the expense of this method, relative to countercurrent solvent extraction,

ion exchange is now used only to obtain the highest purities of lanthanides (typically greater than 99.99%).[citation needed]